A Guide To The Sonar Fish Finder

Fishfinders have made angling more interesting for professional anglers as well as for the novice anglers. Latest marine technology makes sure that you get the best features to grab more fish in less time. Many advanced technologies have been introduced in the past few years, to make fishing more fun and interesting. Sonar technology is one of them. Sonar actually stands for the sound. Sonar waves are a kind of sound waves that a transducer, mounted on the transom of the boat, sends deep into the water.
These sonar waves travel down into the water in the form of a beam angle. The purpose of sonar technology is to provide you with the best and life-like images from underwater. Anything that comes in connection to this beam angle, a transducer collects that sonar reading and displays it on the Fishfinder’s LCD.
Fishfinders come with different types of sonar beams. Some have single or dual, while many come with multiple sonar angles to provide you the best underwater experience.

Single and dual beam sonar that works on two levels (narrow & wide) to identify the target.
Down imaging Sonar works to give you 3D images of what is exactly under the boat. This sonar beam is quite a thin slice of high-frequency sonar waves.
Side Imaging Sonar covers both sides of your boat. These two beams on both sides create a photographic image of the underwater terrain including fish and structures.

Deeper sonar is one of its kind smart portable, ultra-light fishfinders. Laced with many great features, it has turned fishing and angling into a fun activity. Let’s take a look at its specifications.
Wireless/Portable
It’s a wireless marine product that functions with advanced Bluetooth technology. Its portability makes it an ideally handy device to fish at any spot in the water. Bluetooth technology gathers and transmits all the necessary underwater data to your device; mobile or tab.
Areas of Functionality
Deeper sonar fishfinder can cover large areas like the pond, river, and sea. The device keeps floating on the water surface and gathers the sonar data. Whether it’s the shore, boat, kayak, or ice fishing, Deeper is functional in all the areas. It info, it gathers, includes; underwater structures, vegetation and fish details.
Distance 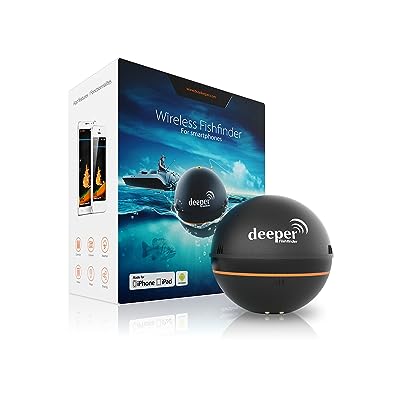 The ball-like portable angling device may operate at the approximate distance of 1.5 ft (0.5 m) to ~130 ft (40 m). Deeper sonar works in both fresh and salty water.
Dual Sonar Angle
The dual beam feature covers the depth area both on narrow and wider scale.
Temperature Sensors
Its advanced temperature sensors keep you updated of the underwater fluctuations in the temperature, to give you the best biting conditions.
Deeper Sonar App
To start working with Deeper, you would have to download its smart app. The free app turns your device into a great angling interface. The app comes with various handy and easy-to-operate features. These features include;
Compatibility
The app is compatible with iOS and various android devices.
Operational Mode
The app works in both offline and online mode to provide you the best sonar data. You can not only mark the newly-explored fishing spots but also keeps the record of the previously angled fishing spots.
Other App Features
Weather forecast feature keeps the angler updated to the weather conditions for the five coming days.
Solunar Forecast Calendar helps you determine the best time and days for fishing in a particular month.
Screen color mode lets you adjust the screen light in the modes like day and night.
Fishing Notes offers space to note down the fishing info.
Camera option lets you record your whole fishing experience.
Social media option provides you the chance to share your angling expedition on various social media sites like Twitter, Google Plus, and Facebook.

With its broadband sounder sonar and 83/200 Transducer, angling has become an interesting task. Let’s take a look at its various features.
Display
The device offers 320 x 240 LED screen with a color screen. It provides great underwater detailing even in the broad daylight. It’s also capable of a wide angle viewing on the underwater terrain.
Transducer
83/200 transducer is designed to give you the best fishing experience. Make sure, you have mounted it accurately to the boat (in a submerged way on the transom of the boat). If the transducer is not installed properly, you would not get what you want. It also performs perfectly on a kayak.
Fish ID Feature 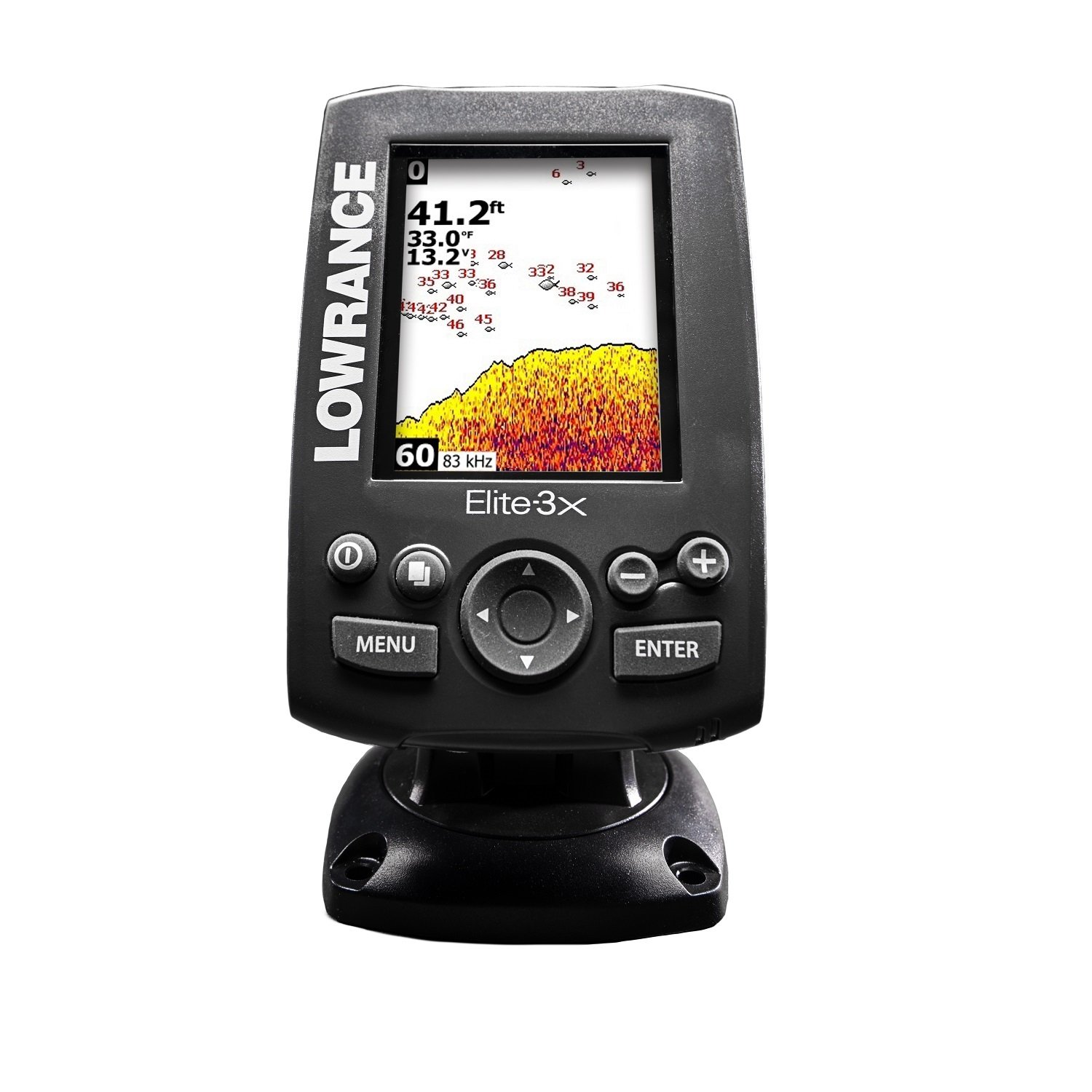 This feature displays the targets in the form of the fish icons, rather than the natural fish arches. The additional features include fish trekking and fish alarm to keep you updated of the fish movement under the boat.
ASP Technology
Advanced signal Processing Technology makes the visibility of the target easy for you. you do not have to adjust any display settings or manual adjustments for it.
Sonar Frequency
With a dual frequency of 80 or 200 KHz, you can get maximum detailing of the underwater structures and targets. You get a conical coverage view of about 60 degrees for a wider view, and 20 degrees for the best target separation.
Broadband Sounder Sonar
This advanced feature skillfully detects and identifies the fish targets, bottom contours, underwater structures detail, reduced clutter, and thermoclines. It consumes less battery and guarantees an increased transducer life.
Backlight
The backlight feature makes angling easy for the night as well as daytime. The power button of the device doubles for it.
Battery
It functions with a chargeable battery but you have to purchase that separately. Not included in the packaging. 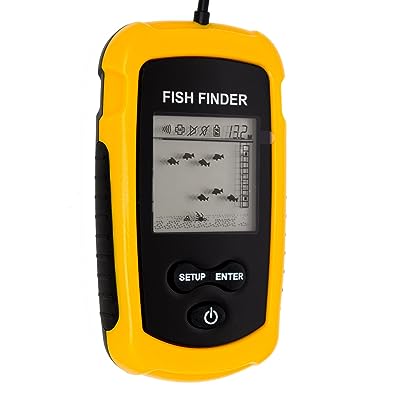 Depth
The handy marine device can measure the depth in meters and feet. It can explore the surface 100m (328.08ft) maximum and 0.7m (2.30 ft.) minimum. The fishfinder gives the angler an approximate location of the target.
Transducer/ Sonar Beam Angle

The device has a round transducer sensor to explore, it comes with a 7-5 cable. Furthermore, the angling device comes with a sensor beam angle that performs underwater, in 45 degrees’ angle.
Area of functionality
This handy device can explore underwater structures, greenery, short and tall weeds, rocks, sand and the seabed itself. The fishfinder can perform in various levels of water i.e. pond, river, and sea.
Fish Alarm
A loud fish alarm updates you as soon as a fish navigates through some nearby area.
Waterproof
Unlike many other angling devices, this fishfinder is not for putting in the water. Only the transmitter is powerful but not the receiver.
Sensitivity Settings
The portable fishfinder locates the fishing spots and fish targets but would not display the info about the size of targets. If you want to know more about fish sizes, you would have to set the sensitivity settings. High sensitivity level displays both small and big sizes of targets. When you set the sensitivity on low, only big sized fish can be seen.

My blog have a lot of  fish finder. Do you want to know about best fish finder?

How To Install A Fish finder Like The Professionals

A Comprehensive Guide On How To Read A Fish Finder

Getting Some Fish Finder Help